Waxing Poetically During a Long Day 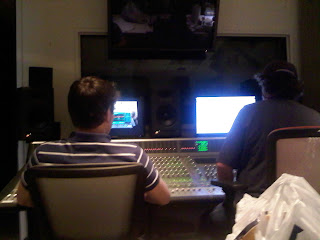 Working in the final mix with Daniel and John. This is an awesome experience and I can't wait till I can do this full time. END is going to be better because of the care and concern they've brought to our film. So many issues waited to present themselves until the last few weeks of post and Bill, John & Daniel have met everything head on and made my job as a director much less stressful.

We are in the home stretch and a year of my creative efforst is about to be done. I thank God for everything that He has done to me and for me in this last year.

So tonight, I'm going to dinner with my mom. It's pretty much just like any other Saturday night. Except, tonight, I'm wearing these ripped jeans.

Hold any significance to you?

I didn't think so. But they do to me, and maybe, one day, it'll mean something to someone else. Anyways, to get to the point. I'm wearing these ripped jeans, but they aren't just any ripped jeans. These ripped jeans are the jeans I wore on the set of END. I spent every weekend in these jeans for weeks in August and September. They've kind of just been a part of the journey. Sure, their kinda worn and faded, but isn't END kinda that way too? I mean, of course I'll never forget the memories that happened on the set(EARMUFFS!), but it's a bit worn, in a good way. It's been a little less than a year since we started END, and while that time may have flown by quicker than anyone expected it to, it did. And I'm pretty sure that I can say this for anyone who has been working on END in Post, they're tired and worn, just like the jeans. The memories that have come from production and post will never fade, and even though the journey has been restless and tiring, and even though everyone is worn out, we live on, everyday, and I don't know about anybody else, but I'm pretty dang excited to see the finishing project.

So tonight, in honor of the last weekend of post, I'm wearing the ripped jeans. They've been through it all, and so it's only right that they are worn tonight.

I'll always look at these ripped jeans and see the hard work and sweat put into END, and I wouldn't have it any other way.

Signing off, one more time,
Lauren

Megan’s right, we’re almost done. We’re so close I can taste it. Over the past few weeks I’ve been able to see the movie come together in ways that I never thought possible. At this point I’m not just exited to finally be done with this year long, grueling process and to finally be submitting the film to festivals, but perhaps for the first time I can honestly say I’m honestly, genuinely exited about sitting down my friends and family and showing them what we’ve done. I think when we do, after all this time, after all this talk; they’ll see we haven’t been completely full of it. I actually think this is going to blow away the people that I love and respect most and that’s something very special to me.

Then there’s my greatest joy of all. Something that as time has gone on I’ve begun to realize will mean more to me than anything else. I think the greatest moment I will experience throughout this entire adventure is when Megan and I get to sit down in a room, probably crack open a bottle of wine and watch END together, just the two of us, alone in a room experiencing the final product of the fruit of our labor.

This project began almost a year ago with the two of us sitting down and deciding we were going to do something insane. Through everything we have been the two people that have been involved in EVERY single aspect of the film. We made this movie for each other just as much for the world of cinema as a whole. By the time most siblings hit their mid to late twenties they’re barely on speaking terms, much less setting aside a whole year of their lives to work hand in hand with each other, toiling to make their dreams a reality.

I would like to think that great things are in store for END. I can honestly say we have surpassed our wildest expectations. I’d like to think that this will be the beginning of great and lucrative careers for all involved. I’d like to imagine that twenty years from now all involved will look back on this movie as the break point of their careers and lives. I’m hoping that what we did with and on this film is just a drop in the bucket compared to what the future has in store. I think, no make that, I KNOW we’re going to make bigger and better movies but for me none of them will ever hold quite the same meaning this one does. END has been a labor of love from the beginning and more importantly it wouldn’t have happened without love. I love my sister and I love that WE did this crazy, remarkable thing together and that’s why when we finally get to sit down and watch it done and complete, for the first time together… well, that’s going to be something I cherish forever.

The movie will be done this weekend. It's actually going to happen. I am happy but exhausted. Thank You God!!!